Since the Sandinista Revolution, Nicaragua has been marked by projects which reach the most remote corners of the society and involve people in self-realization, community growth, and economic development in unique ways. One "corner" of society which almost always remains at the back of the priorities in a poor society is that of disabled people. Many people living in a country as poor as Nicaragua find life too burdensome and resources too scarce to get help with their handicapped family members. Far too often, the world of a person facing some disability revolves around the television and the back patio of the home, because all the other members of the family are struggling to put food on the table.

Our friend Patricia Lopez directs an organization which addresses the needs of people with special needs in Managua. Asociacion Psicoballet Nicaragua offers physical and mental stimulation for disabled people, at prices scaled to the family economy of each participant. Many participants receive complete scholarships, because their families are disintegrated and without gainful employment. Others pay a small amount, in accordance with their self-declared capacity.

This past December, a gala performance by the young (and young-at-heart) members of this group was held in downtown Managua. The performers in costume performed their choreographed dances as parents, friends and allies watched. The students of Apoyo Spanish School made a special excursion to see this event, and Joyce Procure took photos and video shown here. 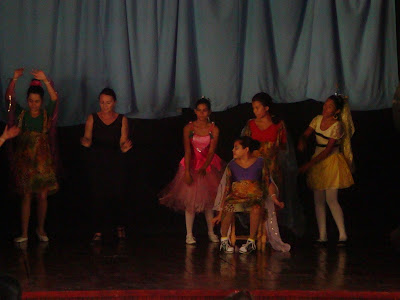 The challenges facing the participants of the gala are numerous, diverse, and in many cases, severe. But in each case, they could express themselves, with hands and feet, or if not, with their faces and eyes. The members of this group, with different kinds and severity of disabilities, learn to express themselves instead of hide, and to encourage and help one another. 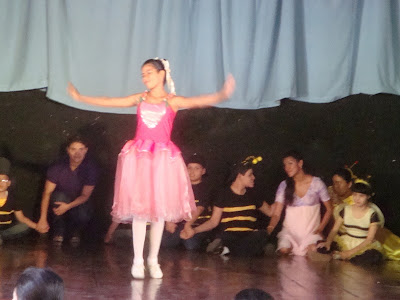 Participation in an event like this just does not happen for children with disabilities in Nicaragua, unless of course their parents are millionaires. Thanks to Psicoballet Nicaragua, many young people who never exercise or express themselves, enjoy involvement in activities that those of us without disabilities may take for granted. These young people participate in a program of movement, exercise, and rhythm, where they learn to value their bodies just as they are, and to express themselves in movement. As the photos and video below demonstrate, these young people have great pride in themselves, as they performed on stage.

Each participant is facing a different challenge. Some have paralysis, others autism, schizophrenia or Down's syndrome. Some face challenges without names found in textbooks. All of them come from families who can't afford 24-hour, professional attention to their children's needs. Many of the parents are just barely getting food to the table for their families, and the majority of the families are broken. Asociacion Psicoballet Nicaragua gives the children in these settings opportunities within the possibilities that their families encounter. 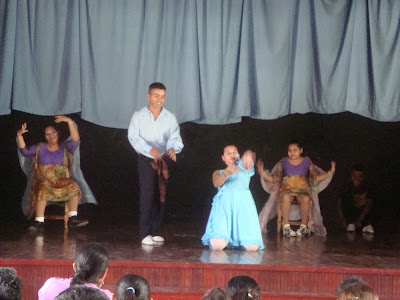 Psicoballet Nicaragua is opening up a new dimension in the lives of handicapped people in Nicaragua. We are proud of them, because they help to make Nicaragua a happy place for some of the people too easily forgotten in our society. Following are several wonderful videos made by Joyce Procure, of the Gala 2012 in Downtown Managua.

We do not have a precise count of the number of butterfly species in Nicaragua. Although some scientists specializing in butterflies and moths have come to study the butterflies of Nicaragua, and a notable effort to study the butterflies occurs among scientists inside the country, publications detailing the species common to Nicaragua are not found in all families. The butterfly and moth (family Lepidoptera) species record in Nicaragua is partial and is mostly limited to certain, more commonly studies families. As a result, a dedicated study of the butterflies is likely to turn up something not yet documented in Nicaragua-a new species or subspecies, or perhaps an association with a plant not yet known to science. Butterflies (Lepidoptera) all have intimate associations with particular plant species, especially during the caterpillar stage of life.
We are engaged in a long-term monitoring project of certain faunal groups, among them, the butterflies which are attracted to rotten fruit. Almost all the butterflies which come to our rotten fruit traps are in the family Nymphalidae. This group is known as the brushfoots, and another common name for them is the four-footed butterflies, because their forelegs are reduced in size.
The upper side or dorsal side of the brushfoot wings is often brightly colored. However, butterflies tend to maintain their wings erect when perched, exposing the underside or ventral aspect of the wings, which in this family are often dull or cryptically patterned, to prevent their detection when perched on the forest floor.
In our study, butterflies are attracted by rotten fruit left on the forest floor, into a barrel-shaped trap only a few inches above the fruit. Once butterflies come to the fruit, they tend to fly into the trap when attempting to depart. We note the number of each species captured in each trap, then leave them to resume their natural lives.
Our study of the butterflies of Laguna de Apoyo Nature Reserve provides a visceral satisfaction to all who participate. Seeing a butterfly at close range reveals many secrets to its beauty.
Interns and volunteers are being accepted to study the butterflies. If you would like to participate in our studies, please contact us!

The Pacific coast of Nicaragua hosts two of the five most important beaches for Olive Ridley Turtle (Lepidochelys olivacea) reproduction in the Americas. One of them, Refugio de Vida Silvestre Playa La Flor, is located south of San Juan del Sur about 18 kilometers. The other, Refugio de Vida Silvestre Rio Escalante Chacocente, is north of San Juan del Sur, and south of the beaches near Managua. Both these beaches, designated Wildlife Refuges by the Nicaraguan Ministry of Natural Resources and the Environment, Students of Apoyo Spanish School made a pilgrimage to the Chacocente beach recently to witness the thrilling events of sea turtles laying eggs along the beach, as well as hatching of nests, with baby turtles scurrying along in their first steps toward the sea.
Female Olive Ridley turtles amass along the shores of selected beaches, and they mob their beaches in a group egg-laying event. The nests erupt with up to about one hundred baby turtles which, upon hatching, push in unison to break out of the sand packed above them. Once out of the nest, the newly hatched turtles make a mad dash toward the ocean, through a gauntlet of dangers such as crabs, raccoons, vultures and caracaras, all feasting on the babies as they race to the water. Once in the ocean, baby turtles are prey for lots of fish poised to feed on them. The attrition among newly hatched Olive Ridley turtles is dramatic.
The dark sand at Chacocente beach is, at special moments, crowded with hundred of turtles laying eggs, and thousands of hatchlings racing to sea. Although the majority of the activity occurs under the cover of night, much can be seen during the daylight hours when the peak activity is happening. Often, one nest, near hatching, is destroyed by a turtle digging to lay her own eggs, and the broken eggs rot, destroying all the eggs in both clutches, and polluting the beach all around. By the end of the nesting season, the nests often do not survive to hatching, thanks to the heavy loads of microbes throughout the beaches.
The normal attrition caused by double-nesting turtles, however, is just one more natural hazard that sea turtles face. Much more serious threats are posed by humans, however, to the Olive Ridley turtle populations around the world. Its eggs, considered delicacies everywhere they are found, are harvested for human consumption unsustainably. Nicaragua has recently banned the harvesting and sale of sea turtle eggs, but restaurants still carry them, because demand is high.
Sea turtle beaches can be destroyed completely by residential and touristic development. A tragic example of the destruction of a beach used by the Olive Ridley turtles for nesting is Acupulco, Mexico, where lights from touristic development distract the turtles from laying eggs. The Nicaraguan beaches must stay pristine and even use of flashlights must be kept to a minimum in order to encourage the continued use of the beaches for turtle reproduction.
Scientists still know little about sea turtle reproduction and biology, so programs to learn more about them including tagging adult sea turtles with radio transmitters, counting turtle nests by season, and other marking programs are being applied wherever sensitive populations are found. Turtle hatcheries and other programs are promoted to increase the rates of baby turtles reaching the oceans, in an attempt to increase adult populations. Some programs focus on improving the lives of poor people living in the vicinity of the beaches, in order to provide alternatives which allow the people to resolve their basic needs and to find ways to earn a living through sustainable, environmentally compatible, tourism.
Every time a few dollars reaches the hand of a local person working to save the Olive Ridley turtles, real progress is made in the protection of the species and especially the populations which reproduce on the shores of Nicaragua. Rural communities are plagued by unemployment, and the little employment in the area is very poorly paid. Subsistence farming does not sustain families in a decent quality of life, and the local people around these beaches need incentives to protect the turtles instead of harvesting and selling their eggs.
Seeing an Olive Ridley turtle lay her eggs is dramatic, and watching the miracle of newly hatched turtle babies race toward the ocean is even more so. By visiting one of the turtle beaches during these events, tourists make local people appreciate their natural treasure by helping them earn money through its protection.