Laguna de Apoyo is the most beautiful place in Nicaragua

Mankind is the worst enemy of natural areas such as Laguna de Apoyo. Trash dumping, hunting, illegal construction, and deforestation with pesticide use are rampant wherever there are people, and Nicaragua is not different. Just below the Catarina overlook, for instance, a group of "investors" with the blessing of the then-president of Nicaragua built 65 bungalows, a hotel and convention center, all of which add up to a serious ecological disaster, as well as a financial nightmare for the non-Nicaraguans who joined the project as co-investors. But not just like in all countries, many conscious, caring people are found in Nicaragua. For instance, dozens of members of the local community came to Laguna de Apoyo Nature Reserve to participate in a tree planting activity earlier this year. Thanks to all for volunteering your time!
The lake is usually very quiet, especiallly at dawn, with trees along much of its shore attracting birds and other wildlife. Weekends, however, attract visitors from Masaya and other communities, and the lake shore can be festive with families enjoying a day out in nature. The lake stretches four kilometers across and is 180 meters deep, with slightly salty water filled with volcanic minerals. Water clarity varies from five to fifteen meters, making the lake ideal for SCUBA divers to enjoy.
Lake Apoyo is known for its water, but more is going on than may meet the eye. This lake is located inside a volcanic crater which exploded 23,000 years ago, leaving a gaping hole hundreds of meters deep in the earth. Hot spots still abound around and inside the lake, too. SCUBA divers can easily find volcanic vents in the lake, and a few are also found on the lake edge. Many water wells are useless, because the water they produce is hot, salty and corrosive.


Most people think of the water in the lake when they think of Laguna de Apoyo Nature Reserve, because it is simply spectacular. Our team of wildlife specialist and volunteers, however, have taken the opportunity to learn many of the secrets of the jungle around the lake, inside the volcanic crater. Over four hundred species of plants are found in this forest, along with dozens of species of mammals, reptiles, and hundreds of birds.

Professional wildlife guides can arrange guided tours of the nature in Laguna de Apoyo Nature Reserve. A typical birdwatching walk of only one hour at dawn, for instance, yields around 25 species.
Estacion Biologica provides lodging, meals, and services such as birdwatching SCUBA diving, and kayaking the lake. We also provide courses in Spanish and in natural resources management. Our site is operated by FUNDECI/GAIA. Visitors and tourists are always welcome.

Most people who SCUBA dive have experience in the ocean. But diving in a tropical lake is a unique experience, especially when diving in Lake Apoyo. Its water is too salty to be potable, however it is still near the buoyancy of freshwater. Lakes differ from the ocean, too, in smaller waves and currents, and fewer dangerous animals. Lake Apoyo has essentially no moving water, making the dives easily managed. No fish or other animals in Lake Apoyo sting or bite!

Lake Apoyo is not just a freshwater lake, however. It is a volcanic crater lake, occupying a huge volcanic caldera between Volcano Masaya to the north and Volcano Mombacho to the south along the string of volcanoes across the Pacific side of Nicaragua. Because the Apoyo volcano is mostly a hole, however, the lake is its most prominent feature.


FUNDECI/GAIA coordinates SCUBA dives in Lake Apoyo, where you can accompany scientists in their study of the fishes. Each month, our divers review fish populations in several habitats, and visiting divers can join us on our dives. Divers get to see many species of fish in a single dive, and learn how these fish live, breed, and how we are working to protect them.

Not so many fish species occupy Lake Apoyo: only jaguar cichlids (Parachromis managuensis), mollies (Poecilia sphenops), silversides (Atherinella sardina), and several members of the Midas cichlid species complex (Amphilophus cf. citrinellus) are considered native. These fish populations probably got their start in Lake Apoyo by hurricanes, birds, or even the precolombian human populations that could have brought some individuals from Lake Nicaragua, just four kilometers to the east.


The Midas cichlid population of Lake Apoyo has attracted the attention of scientists for many years, and has been the principal cause behind the studies we pursue. In 1976, George Barlow began the current trajectory of interest in Lake Apoyo by declaring the arrow cichlid (Amphilophus zaliosus), as a new species. This lake is among the best study sites in the world for sympatric speciation among animals.

Our ecological studies in two lakes, Apoyo and Xiloa, where we have also performed several years of monitoring, are essential to the Midas cichlid species discoveries. Without being in the water, observing the fish month after month, we would never have been able to distinguish these very similar and closely related species. Our monitoring program has given us a wealth of information which is behind the species discoveries and several other new findings.

The members of the Midas cichlid species complex found in Laguna de Apoyo are:

The fish of Lake Apoyo are not just some rare novelties. They are facing some serious threats to their continued existence. One of the threats comes from introduced, invasive fish species. On a few occasions, tilapias have been introduced, most notably, in the 1990's as part of an aquaculture experiment using the Nile tilapia (Oreochromis niloticus). This misguided, disastrous activity was conducted with the approval and participation of the Ministry of Natural Resources and the Environment during that period. At the time, tilapia was touted by some influential individuals in Nicaragua as an economic "silver bullet" which would make investors rich and would feed poor people, as a kind of pinnacle to the Blue Revolution. The issue of environmental and health impacts of improper tilapia aquaculture methods in Nicaragua was recently featured in the New York Times. Many ripostes followed, too!

In 1991, an over-enthusiastic local fisherman added to the mix in Lake Apoyo, by bringing a bucketful of bigmouth sleepers (Gobiomorus dormitor) he had just caught from another, nearby lake, to Lake Apoyo and dumping them in. A few fish quickly became thousands and today this fish is ubiquitous. The threats this fish poses to Lake Apoyo's endemic species is magnified by their loss of sensitivity to the dramatic threat the bigmouth sleepers pose to their fry. The research team at GAIA worked with scientists from Finland and Germany to demonstrate the evolutionary naivete to fry predation by the introduced bigmouth sleepers in a 2012 publication.

We also coordinate underwater lake cleanups periodically, our third one was performed in 2011.

Would you like to dive with us in Lake Apoyo? We would be happy to schedule a dive with you. You must have the equivalent of an open water certification. We can provide all the equipment and you can help us in our research on these very special fish.

Estacion Biologica volunteer Florian Schmid recently spent a week participating in a very noble project, to provide better library resources to the children in a rural school in Merida, Ometepe Island. This island consists of two volcanos, Maderas and Concepcion, in near the western shore of Lake Nicaragua, also known as Lake Cocibolca. The inhabitants of Ometepe, the largest island found in a freshwater lake on the entire planet, are distant from "civilization", and they have few resources to learn the things we city folks may take for granted. An environmental activist group from the National Agrarian University organized a series of activities to raise funds to provide books and supplies for these children. They sent a few hundred books to the school, and engaged the local children in several activities.

All children deserve a happy childhood, filled with opportunities to do and to learn, and books are an essential component. Florian and the group from UNA have made a difference in the childhood of some children in Ometepe. If you would like to support causes such as this, contact us to learn of opportunities for donations and volunteer possibilities, too. Thank you for caring about the children of Nicaragua!
Publicado por Laguna de Apoyo en 1:17 PM No comments:

We invite you to help FUNDECI/GAIA and wear a trendy clothing item at the same time. Laguna de Apoyo t-shirts are now available at Estacion Biologica in two colors-red and blue. The t-shirts are high quality, TricoTextil fabric and stitching, and serigraphed with the Laguna de Apoyo logo on the front. 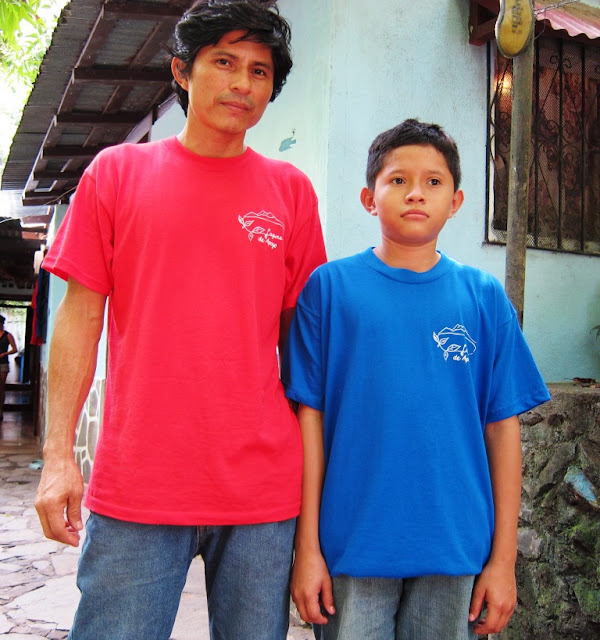 Two full-sized designs adorn the back. One is of a toucan, a squirrel and a Midas cichlid-all emblematic wildlife found in Laguna de Apoyo Nature Reserve. 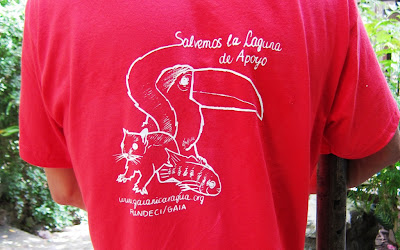 The other back design shows the six endemic fish species of Laguna de Apoyo. These six species, all members of the Midas cichlid species complex, are facing threats of extinction due to human activity. Our work to learn about them and their needs helps the civil society and the government of Nicaragua to determine what measures are most important to protect these species. 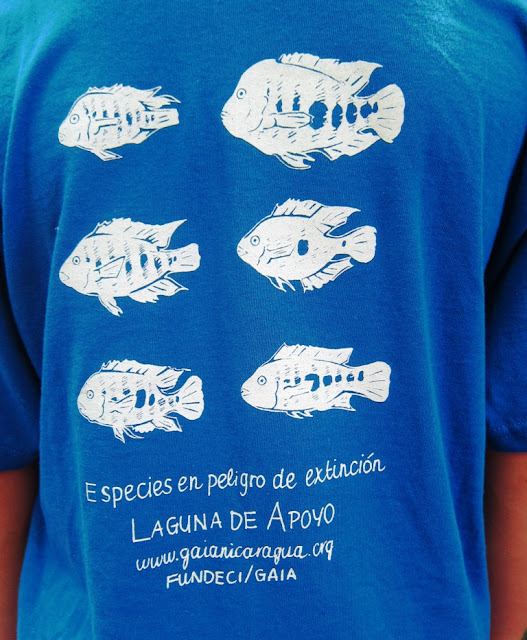 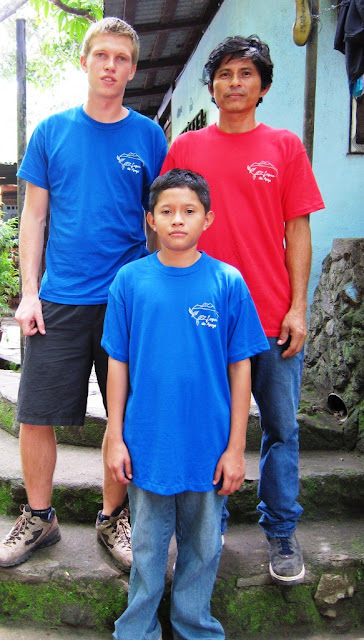 The designs on these t-shirts were provided generously by volunteer Silvia Machgeels. By purchasing a t-shirt, you contribute to our program in wildlife monitoring in Laguna de Apoyo Nature Reserve. 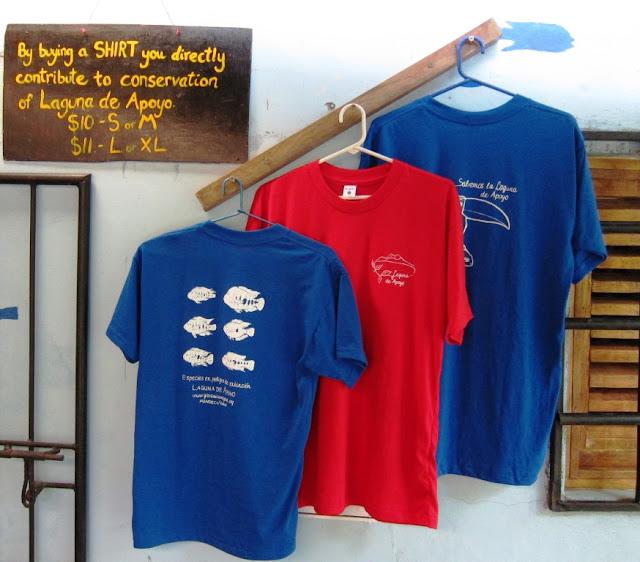 Please come by Estacion Biologica Laguna de Apoyo to pick up your t-shirt or write us at apoyo@gaianicaragua.org. We will gladly send you one!