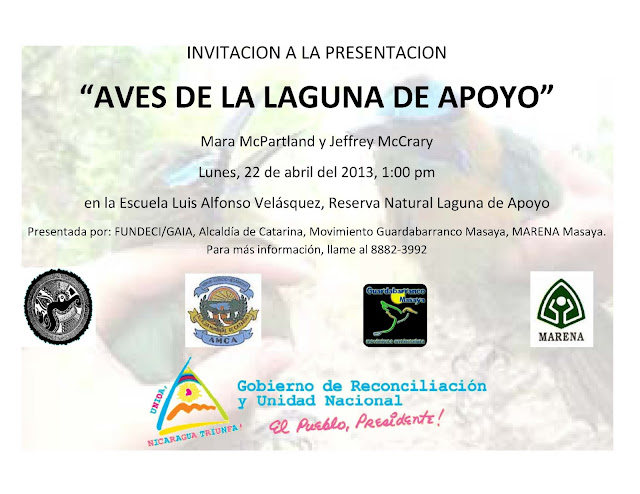 FUNDECI/GAIA has conducted a systematic study of the variation in the bird communities according to land use in five different sites in Laguna de Apoyo Nature Reserve. Mara McPartland, an ecologist from the United States who is on a conservation science internship at FUNDECI/GAIA, will present how land use affects the bird communities. Birds are excellent indicators of forest quality, as is shown by the results of this study.

The presentation will be held at the local elementary school, "Escuela Luis Alfonso Velasquez", just 200 meter from Estacion Biologica. The public is invited, to the presentation and discussion, and refreshments will be served afterward. Whether you are a scientist or conservation professional, birdwatcher or nature lover, or simply an interested person, you are invited.

Some wild animals can be affectionate and cute, especially before they reach sexual maturity. We are so often daunted by how many people want to promote the traffic in wild animals to satisfy their passion for making animals their pets. The wildlife of Nicaragua has been harmed by turning wild animals into pets. This week, we have taken in yet another animal that had fallen into the hands of some misguided individuals using the name "The Peace Project" who thought it would be fun to keep a Variegated Squirrel (Sciurus variegatoides) as a pet. This animal, however, is not a domesticated species, it is a wild animal. What kind of "Peace Project" steals wildlife from its natural habitat?
Several animals make good pets, especially dogs and even cows. These animals, after thousands of years of strictly close association with humans, can no longer live as wild animals. Instead of seeking an animal that lives well in its environment, however, many foreigners put wildlife in Nicaragua at risk of extinction by purchasing wildlife sold as pets from wild animal traffickers.
Estacion Biologica recovered a Variegated Squirrel which had gotten ill from the abuse it had received in the hands of others. The squirrel was ill, weak, and infected with large sore on its side.

Our interns drained and disinfected the sore, and gave the little guy lots of care and observation. Two days afterward, his disposition changed, he became energetic, curious, and confident. The illness began to subside.
Wild animals should live and die in their natural habitat, not as toys for humans. We are confident that this squirrel will get the opportunity to return to the wild soon, in spite of the abuse he received at "The Peace Project". We hope to see him running along the branches of the trees in Laguna de Apoyo Nature Reserve, with other squirrels, instead of captive to foreigners who treat him as a toy. Would you like to work with us to protect wild natural resources in Nicaragua? Please contact us for more information on how you can help, whether in your home country or during a visit to Nicaragua.