Nicaragua has recently received some good news. In the recently published 2014 Global Gender Gap by the World Economic Forum, Nicaragua scored in sixth place. To score more highly than most of the 142 countries in the analysis implies an idyllic situation for women in Nicaragua. The members of most women's advocacy organizations in Nicaragua, however, remain highly critical of gender progress in Nicaragua. Violent oppression of women in the household is still common, for instance. Also, women are often the sole providers and caregivers to children. Another issue which has divided Nicaraguans dramatically is access to abortion for medical reasons.

Nonetheless, a strong law promoting the freedom of women from gender violence has recently been implemented in Nicaragua. Ley 779 (Law number 779) represents a huge advance in the protection of women from violence. Now, for instance, the police are required to arrest suspects of family violence in some circumstances. Many people have argued that such strident measures are needed because of deep-rooted cultural conditions which encourage gender violence and discourage women from defending themselves from it. 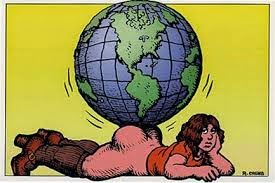 The World Economic Forum ranking relies mostly on indicators of economic, educational, and political access. While in some of these measures, Nicaragua scores poorly, gendered access to education is relatively high. Even more interesting is the extremely high number of women in the National Assembly and in the Presidential Cabinet. Other factors such as levels of domestic violence were not considered in this survey. It would definitely be a mistake to consider Nicaragua a paradise for gender equality, based on this report. In fact, a dramatic symptom of the limited applicability of the report is that Rwanda occupied seventh rank, just behind Nicasragua. Everyone knows that extreme poverty oppresses all, inescapably. Nonetheless, the score tells us plainly that Nicaragua is doing some things right.

Many gender issues are difficult to alter, because insidious social structures reinforce them. Somehow, however, women have figured largely in the modern history of Nicaragua unlike in any other country in the region. Before the Nicaraguan Revolution, women participated prominently in professions and politics, and working class women were the backbone of the economy then. The Sandinista rebels that overthrew the Somoza dynasty included heroic examples of women fighting. And, some dramatic changes during the first Sandinista government widened access to political power to women, including some cabinet-level positions. Later, Nicaragua was led by the first female president in the hemisphere, Violeta Barrios de Chamorro. And now, some political parties insist on 50% inclusion of women at every level in the party structure, including the FSLN, currently in the majority in government. From before the Nicaraguan revolution up to today, the rights and roles of women continue to be a theme of great importance.

Without a doubt, the image of the Nicaraguan woman is well-known as hard-working and dedicated to her family, and capable of operating a household often without depending upon a man. The subtle particularities of similarities and differences among the gender aspects of the societies in the region are very interesting, but what emerges most prominently, is that women still face many difficulties, especially regarding sexual and gender violence. There is still plenty to do in Nicaragua, but we can also reflect upon and appreciate the gains that have been made through the years, and salute all women in their cause to equity.

You can help us keep nature wild in Nicaragua, by volunteering your time with us or making a small donation to support our projects in wild nature conservation.