This week, our team of Marlene Kroner, Lucas Betthausen, Soren Kraack, and Lorenzo Lopez conducted bird population monitoring by mist netting in Laguna de Apoyo Nature Reserve. Every month, we use mist netting to capture birds for a population monitoring longitudinal study. Here is a selection of the birds they caught in photos, followed by a list of all species captured during this period.

This gorgeous bird escaped our view for years in the reserve, particularly because it is only found in the southwestern section of the crater. We have never documented the Grey-headed Tanager on the northern side of the crater, where Estacion Biologica is situated. In spite of its bright yellow plumage, it is not easily seen, either! It is a resident species, present year-round.
﻿
The Painted Bunting is among the most colorful birds in Nicaragua and also in North America, where it nests. The males are exuberantly colored, whereas the females are drab yellow. Our population will be heading northward before the next time we monitor birds by mist netting, next month. This species is of particular concern because of diminishing populations and is listed as Near Threatened on the IUCN Red List. ﻿Habitat loss by the intensification of agriculture in the southern and midwestern US is thought to be the principal cause of its recent population drop, but we know little of birds like this one in their southern habitat. Our captures may contribute to better conservation of this species. We have made another blog entry on this gorgeous bird, where you can read more about it.


There are at least ten species of hummingbirds found in the Tropical Dry Forest habitat of Laguna de Apoyo Nature Reserve. The Stripe-throated Hermit prefers more dense forest cover than others such as the Cinnamon Hummingbird which is more common at Estacion Biologica. This little bird may have co-evolved with specific flowers from which it feeds, hence the decurved bill. This species has recently been named as distinct from the Little Hermit (Phaethornis longuemareus) which now is limited to South America.


The Tropical Dry Forest habitat abounds in flycatchers (Tyrannidae). Among the less flycatcher-like in behavior of this family is the smallish and retiring Yellow-olive Flycatcher (Tolmomyias sulphurescens). It makes a small pyriform nest with an entrance near the bottom. We often have nests in the yard at Estacion Biologica. The feathers at the top of this bird's head have been wettened by the handler to examine ossification of the cranium-a test for the bird's age.

The Red-eyed Vireo migrates long distances between its nesting areas in the US and wintering ranges in Central and South America. Migratory birds are especially vulnerable to the many dangers of a long trip and need to re-establish territories in potentially crowded and hostile areas twice each year. This species is common in season throughout the Laguna de Apoyo Nature Reserve forests.

Here is a list of the birds captured during the April mist netting. Notice how different this list is from the birdwatching list of the same date. It gives you an idea, too, of what you can see when birdwatching in Laguna de Apoyo Nature Reserve. 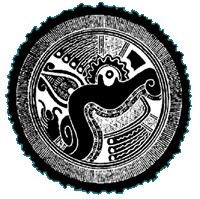 Love your website! I really enjoy the pictures and information on the birds. Also wanted to let you know that the picture above is of a Lesser Greenlet, not a Yellow-olive Flycatcher.