We are actively engaged in learning about, teaching about, and protecting wild nature in Nicaragua. Our princpal focus is Laguna de Apoyo Nature Reserve, where we have executed years of careful study of the birds, fish, and more recently, other creatures of the forests, lake and streams. Although this place is close-too close-to Granada and Masaya, which facilitates inappropriate and excessive human activity, there is still an abundance of nature here. Here we will show you some aspects of the wildlife of this area which you might not have contemplated before.


The first animal we share with you here is the White-necked Puffbird (Notharchus hyperrhynchus). It was previously considered to range from Mexico into the Amazon, but the South American birds have a smaller bill, and recently, "our" birds have been reclassified into another species, leaving the older names for the southern forms (Pied Puffbird, Notharchus tectus). It's a crazy looking bird! And a real prize for a birdwatching experience. This individual was caught by our field study group by mist nets. This species is much more common in the south-western part of the reserve, than in the northern part, reflecting that it prefers somewhat better forest quality, as the northern part is more heavily degraded. 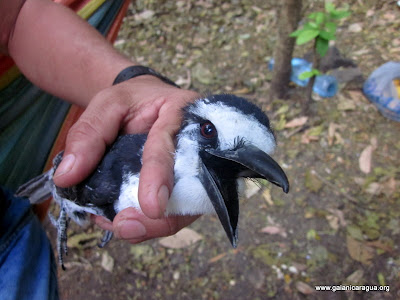 There is a little-known crab common to Lake Apoyo, known locally as jaiba, but without an English common name: Potamocarcinus nicaraguensis. We don't know much about it, except that it tastes good! We have begun to keep counts of crabs in our transects in the long-term flora and fauna monitoring project we conduct in Laguna de Apoyo Nature Reserve. We see one or two crabs on most of our SCUBA dives in the lake. Locals eat it and it appears to survive the low levels of harvesting pressure well enough. We have recently found it in one of the small streams that flows year round into Lake Apoyo. These crabs are important to consider in aquatic conservation in Laguna de Apoyo and its tributary streams.

Butterflies abound here. We have been observing the butterflies a few years, and already have one scientific publication in which a few dozen new species for Nicaragua were documented. Today, we are focussing on the butterflies that feed on fruits, in a quantitative study of the effects of land use by man on the butterfly communities. Most of the butterflies we observe in this study are from a single family, Nymphalidae. However, we continue to watch and admire all the other ones. The next two pictures were taken of a freshly emerged individual from its coccoon. The wings were beautiful but had not yet taken flight.

As a generality which holds quite well taxonomically in this region, we call those of the order (Lepidoptera) which fly in the daytime, butterflies, and those which fly at night, moths. Among the several distinctive features of moths is the antenna which are not clubbed, as in the butterflies, but a variety of other structures such as feathered or segmented. Moths are usually less distinctly colored and patterned than the diurnal butterflies, but there are some beautiful features to them, and in some cases, they can be surprisingly beautiful.

White-faced capuchins (Cebus capucinus) occupy only a few sites in the reserve. There are few, because of poaching for the pet trade, and those still here are wary. Monkeys are not pets! Please do not support the trafficking of wild animals.
We have recently noticed the capuchins in new places in Laguna de Apoyo Nature Reserve. The populations here, like in other parts of Nicaragua, have been decimated by the pet trade. But, it appears that our monkeys in Apoyo are making a small comeback. Here, one looks down on us as we are catching birds by mist netting.


The Mantled Howler Monkey (Alouatta palliata) is more abundant than in past years in Laguna de Apoyo Nature Reserve, thanks to the increased vigilance of park guards against tree cutting, forest fires, and hunting. We are monitoring monkey populations in the reserve, and we need volunteers and interns to help us. Please contact us if you would like to do some monkey-watching.

These photos were all taken in the Laguna de Apoyo Nature Reserve, by amateur photographers. They demonstrate how beatiful the area is, why we think is one of the leading sites for wildlife photography and nature tourism in Nicaragua, and hopefully, contribute to convincing the leaders here to protect it. We need your help. Our studies of the wildlife and projects in repairing the broken forest require money and volunteers. Can you help us at Estacion Biologica? Please write us.