The most common cichlid fish in Lake Apoyo is the little Apoyo cichlid, Amphilophus astorquii. It was officially discovered as the culmination of years of study in Estacion Biologica, in a publication in 2008. About three-quarters of the cichlid fishes seen in Lake Apoyo are this species. They breed from December through February, as is shown in the photograph below. 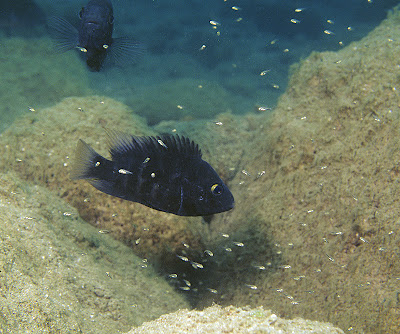 When breeding, thin, light bars appear over a bluish-black background. The dark coloration emerges from dark dorsolateral spots which remain when the fish is not breeding. The males are always noticeably large than the females in any given breeding pair. The breeding pairs form over a hole and utilize a hard surface such as a rock to attach eggs, which are cared as they hatch to form wigglers which later detach to swim freely. The parental units stay actively care for the fry until they are free-swimming approximately forty days. If parental protection is lost, the fry will be eaten by predators within minutes. 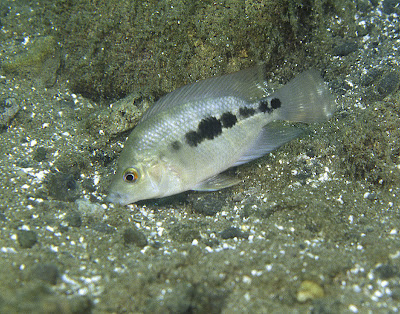 An important component of the diet of the little Apoyo cichlid is snails (Pyrgophorus coronatus). During 2011, two volunteers collected data on the snails of the lake, in an effort to understand better the food webs which must be protected for these fish. These volunteers studied Spanish while working with our staff to collect field data. SCUBA divers collected samples of snails in different habitats and then analyzed them. 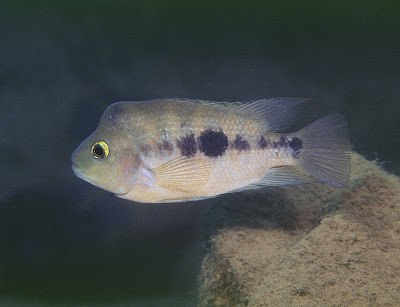 Males often develop nuchal humps as the one in this photo, as a secondary sex characteristic. This fish is in nonbreeding coloration, showing a light, neutral background color, and dark dorsolateral spots. Vestigial dark vertical bars can be seen faintly above and below the spots. When the fish begins its transformation to breeding coloration, these bars will darken and thicken, including the head, leaving the light coloring on the fish limited to thin regions between the bars. 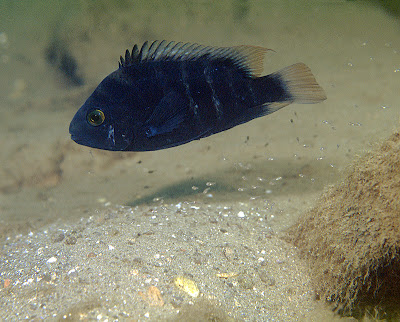 The little Apoyo cichlid is only found in Lake Apoyo, as is confirmed by a recent phylogenetic study conducted by Matthias Geiger, Jeffrey McCrary and Uli Schliewen, in coordination with Estacion Biologica. They are easy to observe, and our monitoring project gives us lots of opportunities to watch them year-round. Other members of the Midas cichlid species complex in Laguna de Apoyo are: Amphilophus chancho, Amphilophus flaveolus, Amphilophus globosus, Amphilophus supercilius, Amphilophus zaliosus. In addition, the jaguar cichlid, Parachromis managuensis is found in the lake; the molly, Poecilia sphenops; and the silversides, Atherinella sardina. Recent introductions of Gobiomorus dormitor and the Nile tilapia, Oreochromis niloticus, can be found as well.

You are welcome to join us in a SCUBA dive to see these fish in their natural environment.
All of the above pictures were taken by Ad Konings, and copyrights are preserved. Ad is a great colleague and friend, and we are grateful that he has taken interest in the cichlid fishes of Nicaragua. Please do not use these photographs without permission.

Several species of the Midas cichlid species complex (Osteichthyes: Cichlidae) are found in Lake Apoyo, Nicaragua. The largest of the group in this lake is the Chancho Cichlid, Amphilophus chancho. The Chancho Cichlid is endemic to the lake and it evolved there, and it was officially described in 2008. Until then, it was considered a color form or Evoluntionarily Significant Unit of the species Amphilophus citrinellus, whose recognized name in earlier literature is Cichlasoma citrinellum. To date, six species in Midas cichlid (Amphilophus citrinellus) species group have been described in Lake Apoyo, and evidence suggest that several more are yet to be discovered there.